Evan slipped away from Budapest in the early morning hours, and I left later that day to visit my friend in Zagreb, Croatia.  Before he left, I’d told him I was going to Berlin for two-ish weeks, and he said he may head there as well, for work.  I was a little doubtful, but I was hopeful too.  I really liked our temporary travel relationship and was down to keep it going a bit longer.

Once he was in Berlin, he gave me his arrival time and the name of the hotel.  When I walked into the lobby, Mr. Tall, Dark & Scary was dressed in a slim-fitted, expertly tailored, bright blue suit.  His paisley shirt matched impeccably, and he was carrying himself with even more than his usual air of confidence.  He looked like someone who’d take you out to a 5-star meal over candlelight, casually excuse himself to go kill a man with his bare hands, and then continue on like nothing happened before making mad, passionate love to you afterward.

We had more than an hour before the hotel room was ready (god fucking damn it!), so I checked my bag in with the receptionist.  She asked me the name for the reservation, so I gave his.  “Oh,” she said, with an unmistakable note of disappointment in her voice, “You’re with him.”  Haha yeah, girl, I sure am.  I hope I hid my smile.

Anyway.  Evan goes to Budapest, and more specifically to Grandio, all the time.  One of his fantasies has always been to have sex in St. Stephen’s Basilica in Budapest’s city center.  We talked about it extensively and made multiple attempts.  Unfortunately we were there at a time when renovations were going on, so it didn’t end up working out.  Once we decided to meet up in Berlin, though, we set our sights on another target: the Berliner Dom.

Have you ever (and I hope you have) experienced that feeling of intense lust and longing, when physically palpable desire overtakes the room?  When you can think of nothing beyond the overwhelming need to put cock into pussy, to take and ravage and give yourself up to primal instinct?  That’s what Evan and I felt in the balcony overlooking the cathedral as we prepared to fuck.

Here’s how we got there.  Climbing to the upper level of the Berliner Dom, we came to a ring that ran around the indoor perimeter.  The interior wall was paneled with white wood, and every few feet there was a door.  We tried each handle as we circled the ring, but all were locked.  We came to one that was open as a lookout point for visitors to view the cathedral from above, and people were coming in and out of the small balcony area as they passed.

We lingered in the balcony as people came and went until we finally found ourselves alone.  I deftly reached over and pushed the door nearly shut.  It locked from the outside, so if I’d closed it all the way, we may have gotten locked in.  Instead, I knelt down with my feet against the door, so no one could open it without meeting the resistance of my shoes.

My panties were soaked by now, sucking his dick and glancing behind him at the beauty of the cathedral’s elaborate dome, while fantasizing about the sin we were committing.  I was ready, as ready as I’d ever been, to get down and receive his cock from behind.  And he was ready to give it, to slide deep into me, hands on my hips, right there on the floor of the balcony in the famous cathedral.  In that moment, I wanted nothing more.

He pulled back suddenly, out of my mouth, telling me to wait.  He zipped his pants and I pulled up mine, which I’d already dropped partway down my thighs in anticipation.  Focusing seriously through the frosted glass of the door, he whispered, “Security is out there,” and helped me to my feet.  We urgently buckled our belts in silence, waited for the shadow in the door to disappear, and discreetly slipped out of the room.

Continuing the tour, we kept trying the locks on every door we passed, but we had no luck.  We entertained the idea of trying to have sex outside at the top of the dome, but that proved impossible.  We resigned ourselves to, you know, simply enjoying the stunning views.  It was a warm and magnificent day to overlook the city.  I’d been to Berlin before, but not to the top of the dome.  It’s a prettier city than I’d realized. 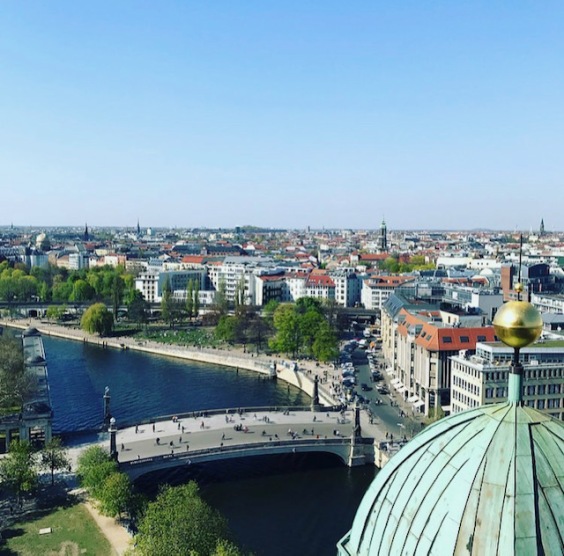 Once back inside, we wanted to try our luck one more time on the way down.  We jiggled some more door handles to no avail, and it became apparent fairly quickly that the security guards were lingering behind us, keeping watch.  Reluctantly, we left the Berliner Dom to buy a bottle of wine and go get a little messed up on the bank of the Spree.

Bonus feature: One night, in the hotel’s courtyard, I got so drunk and hungry that I eventually ate a dad’s small, vending machine birthday cake while he and his family had disappeared inside to order drinks.  I’m seriously an asshole, but I thought they’d left.  After I went up to bed, in retaliation (and because Evan pulls pussy) this guy’s daughter kissed Evan with tongues in the elevator and invited him to her room.  When he woke me up to tell me, I was barely able to sloppily slur, “Bring her here,” before I promptly passed out again, and he passed out too.  No threesome for us!  XD

And with that, I guess I’ll see him whenever he next comes back to Chicago.